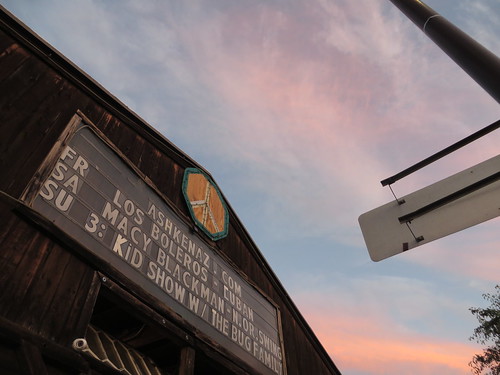 Our team decided on Ashkenaz as our heritage site for its appreciation of cultural diversity and its dedication to preserving its original peaceful values through world music and dance. Ashkenaz was designated a landmark by the City of Berkeley and also has great historical importance to the community as an original site for free speech and political activism. Formerly an abandoned warehouse, Ashkenaz was converted to a dance hall and live music venue in 1973 by local activist David Nadel who intended for it to be a space for folk dancing and political engagement. In creating our project, we intended to form interpretive plans for the future of Ashkenaz that continued to hold these peaceful beliefs at its core. So we listened to stories from volunteers and managers who had worked at the site since the beginning, we heard opinions from new and veteran patrons and we talked to musicians who got their start at Ashkenaz. We also collected historical documents and media from the site itself.

The context of the history of the site played an important role in deciding the central themes for our project, and therefore in what direction our interpretive plans should move. We wanted to mirror the values of the stakeholders and stewards of the site as these are the people who wish to leave behind a legacy of great importance to them, and our interpretive project plans aim to continue their work as the community around them grows and changes. Although Ashkenaz’s basic ethos may juxtapose the increasingly gentrified area surrounding it, we have strived to create themes and plans that engage the community further, to ensure the importance of Ashkenaz isn’t left behind in the wake of technological advancement and digitized new music. We determined four interpretive projects that would enhance the future of the site and help maintain their prominence in the community. These projects include a self-guided audio tour, a community pin board, youth involvement creative games and a musical education website page.

Emily arrived at UC Berkeley this semester as a transfer student from Shasta College in Redding, California. Originally from Alexandria, Virginia, she is majoring in anthropology with interests in GIS and digital preservation of heritage. The ongoing mission of Ashkenaz to promote acceptance of cultures that may be different from our own is why Emily finds Ashkenaz to be so significant and inspiring.

m foggy London town in England, and after much world traveling she settled in America in 2006. She is a junior transfer from Mira Costa College in North San Diego, California and is majoring in Anthropology with a minor in Journalism. Her aspirations after obtaining her Bachelor’s degree include continuing on to Graduate school and pursuing a career in cultural and travel writing.

Chandler hails from the great state of Pennsylvania and is inordinately fond of puns. She is interested in the intersection of sociocultural anthropology and archaeology of the contemporary; pina coladas are all right and getting caught in the rain is fun as long as she’s not on a bike.

rks in amazing ways and it is indeed a small world. Jack grew up in La Puente, Ca–home of the Vineland Drive-in and neighbors with Baldwin Park’s original In-N-Out burger–and later continued his education in Psychology at Pasadena City College to find himself at UC Berkeley. Little did he know would he find similarities with David Nadel, whom was also a Psychology major, about the importance of cultural practices (or, in other words, fostering intergroup contact/friendship) to reduce the psychological tensions among others, or for oneself for that matter. He will be graduating Spring 2016 with the same focus of working with communities to reduce the mental health crisis via cultural and interpersonal means.