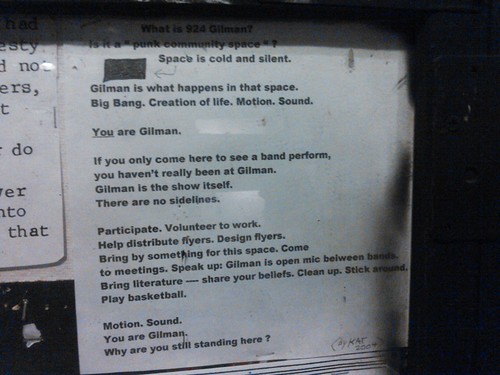 924 Gilman Street is one of the longest running independent music venues in the United States. The establishment is an all ages, volunteer-run 501(c)3 nonprofit organization which operates under a DIY (do it yourself) ethic. Founded in 1986 as a collectively organized music club, it is widely regarded as a pillar of the punk rock community in the Bay Area and beyond. Although it is probably most well known as the place where popular bands such as Green Day and Rancid made their debut, Gilman’s cultural context and contribution is far more significant, and continues to have significant impact on those who choose to readily engage in and contribute to the community which very much constitutes the essence of the organization. They’ve created a safe environment for people of all ages, races, and preferences to feel not only welcome but necessary. Our management plan argues why 924 Gilman should be allowed continue to provide this outlet for the community members to be part of something that is collectively greater than they are. We delineate the threats to survival of the venue and suggest solutions, as it relates to the larger context of gentrification in the area, as well as the constant struggle of keeping the community and the scene alive for future generations. For scores of people, 924 Gilman represents a sense of hope that punk principles and practices can build a successful, long-running community, and we believe that the community and the venue should do everything in its power to preserve the space as one of active and collective negotiation within Berkeley, the Bay Area and the rest of the world.

Project Manager: Tait Adams  is currently pursuing her B.A.’s in Anthropology and Theater at UC Berkeley. As an active member of 924 Gilman and the Bay Area punk scene, her connections allowed for active community participation in the research process. It is her hope that the work done here will contribute to the sustainability of the venue and the cultural work it engages in.

Media Manager: Danielle Belanger is a third year History of Art major with an emphasis on Art and Society. Her research interests include knowledge production, modernity, and cultural alterity. After receiving her bachelors degree, Danielle hopes to attend graduate school and eventually teach. She believes that improving public education is the answer to all of our problems!

Research Manager: Silas Jones is an Anthropology major at U.C. Berkeley new to both 924 Gilman and the punk scenario. Silas is considering pursuing  his graduate degree in Biological Archaeology and hopes to travel the world performing research. His interests include language, music production, sound engineering, working on cars, martial arts, and perfect afros.

Various interviews, recorded and non-recorded, with various 924 Gilman Street members and volunteers. We are especially grateful to the following for their time and assistance:

We could not have done this project without your help.