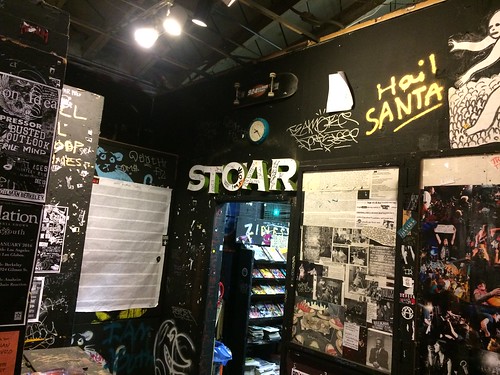 (A shot of the entrance to Berkeley’s concession stand, known as the “Stoar.” Taken by Silas Jones.)

Fundraising for the organization, buying the building, and shared ownership would allow Gilman to continue its collective mission. Improved noise containment during band performances could improve the venue’s potential for longevity and its relationship with surrounding neighbors. Also, increased outreach, such as canned food drives or LGBT awareness events could help the venue gain greater recognition and respect in the public eye raising awareness of Gilman as a center for a culturally rich and progressive community.

To cope with rising costs, 924 Gilman Street has raised prices. Membership cards, costing $2, were originally for life, and were initially credited with helping keep the venue afloat for its initial period of existence. Looking at old fliers and logs shows the policy was changed to a $3 per year membership in the mid-1990s, although it is current only $2. Shows were originally always $5. However, ticket prices have increased, therefore, some shows now cost $12-17, which was “unheard of” until very recently in the venue’s history. The community has expressedfrustration over this rising cost. There has been debate in the past about having shows on more days of the week to boost income, as the venue pays rent by the month, and is only active for a few days out of each week. However, the availability of manpower is a concern.

The Alternative Music Foundation, the nonprofit that runs 924 Gilman, is nowconsidering buying the building outright to ensure the venue’s long term survival. On the website under “Support 924 Gilman” there is an option to donate funds electronically: “Your donation istax-deductible and supports two specific goals: 1) to try to own the building, 2) to lower the doorprice for shows.” Donations are also accepted via personal check made out the Alternative MusicFoundation. The purchase of the building would present a further issue for the Gilman community, as one person or group would own the site. This goes against Gilman’s collectivenature, and includes the fear that the owner may leverage their influence to cause change. Gilman’s members are also debating the idea of collective ownership. 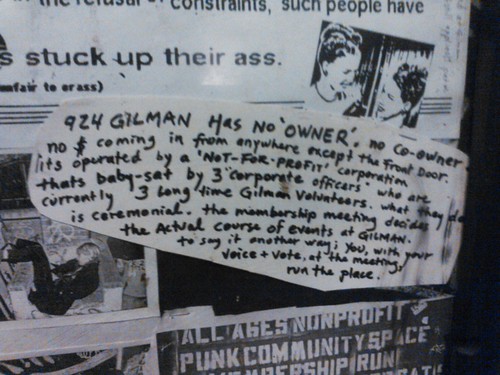 (Some of the posters detailing Gilman’s ideas in the main entryway. Photo by Tait Adams).

In the long term, keeping the community accessible to active participation and involvement is highly necessary. Our management plan seeks to preserve the community participation by means of volunteering, donating or any other means that would perpetuate this vision of “a melting pot of cultures,” as the venue has practiced thus far. It would be better that Gilman close down sticking to their guns, so-to-speak, than it would be for Gilman to remain open under a purely profit based system with zero community involvement. This is the only relevant plan of action because the community constitutes the heart of this organization.  In other words, 942 Gilman’s success over the next couple of decades should be more of the same with a heightened emphasis on fundraising in order to combat economic distress. Additionally, the organization should attempt to reach out to a larger range of people by directing their methods of outreach to a more diverse range of issues/populations. Gilman could sponsor volunteer based events which would be open to the public and which could reach out to more diverse social/political arenas. By including a more diverse range of individuals in the community, Gilman can become an increasingly rich cultural center, which would not be limited to just one or two subcultures.

As was recently brought up at a Gilman membership meeting, new generations of committed volunteers will need to be more involved with the organizational aspects of the club in order for it to maintain a democratic ethos and status as a non-profit organization. We are taking the initiative to increase awareness of the venue through training and educational projects, with the hope to increase numbers of participants from younger generations. We would like to see more members who are willing not only to join in on membership meeting discussions but who are also willing to volunteer their time. By encouraging younger generations to step up and join in, we can contribute to long-term sustainability of 924 Gilman, ensuring that the music club’s values and ethos are upheld, but also that the venue’s policies and operations are kept up to date.

It could help the subculture be understood less as a “subversive” stereotype, and more as a group of committed individuals with a willingness to contribute to current and important issues. This knowledge would improve levels of hostility toward the subculture and institutions which are of service to the subculture. In the end, educating the public about Gilman as a volunteer based, community rearing success would help the organization secure its location in an area which is only becoming increasingly gentrified. Conventional understandings of punk need to be expanded and understood by a larger population in order for “punks” to be accepted and tolerated in the changing social climate of North Berkeley.