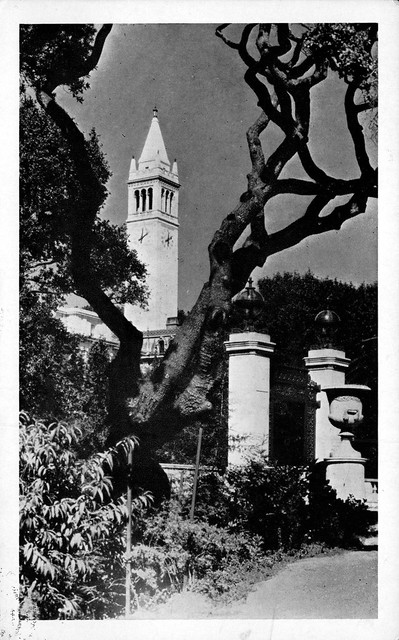 Welcome to the digital portal for the Sather Tower (Campanile) heritage project at UC Berkeley. This project is a semester-long group effort to explore the many significant ways that Sather Tower can be enjoyed as a heritage site, as a symbol for the UC Berkeley community, and as a global icon for enlightenment and higher education. Our site gathers various media, from the final plan requesting for the recognition of the site as a cultural heritage site, to various images and data about the tower. We have compiled background information about the site. This information reveals the history behind the tower, its construction, style, and the many events that have been affiliated with it. Through Sather Tower’s historical context, we move to the modern context of the site. The tower is centrally located and is very prominent, making it a significant place marker and point of navigation for community members. The Campanile serves as a timepiece, and even stores fossils for the museum of paleontology. Sather Tower is the symbol of UC Berkeley and all that it represents as an excellent academic institution, and that symbolism remains today as a lasting piece of campus heritage. Many groups are stakeholders in this heritage: from students, faculty, and staff, to visitors, tourists, and homeowners in the area. Indeed, Sather Tower can be seen, heard, and thought of by all as the beautiful and important structure that it is. As part of our project we have considered the ways that each stakeholder group can be engaged and consulted to ensure their opinion is heard about this heritage site.

We have thought to devise community panels where each group can come together to discuss their ideas about the future of Berkeley’s Sather Tower heritage. Through this community participation, we aim to create a celebratory interpretative environment around the tower that allows multivocality from these diverse constituent groups. In the short term, we plan to create and maintain our mobile apps that showcase this history, heritage, and the interactive possibilities with the tower, and start our community panels to discuss the future of the heritage. In the long term, we plan to continue the physical upkeep of the tower to ensure its continued prominence and beauty as a structure, making sure that it is stable and standing. We have considered the many themes that the Campanile engages with in its presence: time, acoustics, research, and physicality. The Campanile keeps time, it creates a musical ambience about the place, it is actively utilized for research, and it is physically a very significant figure. In thinking through all these themes, we plan to create interpretive projects to incorporate them. Campanile ReIMAGinED allows users to think about the history of the site by overlaying historical buildings onto their present-day view through the camera of their phone. Sather Map Mobile allows multivocality by allowing users to post content about the significance of the Campanile to them into the app and a website affiliated with it. Carillon Hero incorporates a Guitar Hero style playability of the Campanile in order to allow users to work with the musicality of the site experientially. Campanile Replicas gets stakeholders thinking about physicality in different ways by building the tower out of different materials like jelly and wood. Berkeley Beats connects users to the diverse ideas and lectures disseminated from UC Berkeley to the world through a Campanile radio style interface. These are all ways to engage with the themes of our heritage project and the idea of multivocality.

He is a Senior Environmental Economics major at Berkeley. Hailing from India, he moved to the US after high school, to attend UC Berkeley. This gave him the opportunity to experience different cultures and heritages, and immerse in them. These experiences created an interest in studying the cultures and heritage around him. In his education, Gautam is focusing on the Environmental costs of modern economies, and how the environment can be prioritized in our quest for an advanced world.

He is an undergraduate student majoring in Media Studies at the University of California, Berkeley. As the only guy with a media background in the team, he took on the role of media manager and handled all the media related problems in this project. He has a great interest in various media and is constantly experimenting new media with an open mind. He sees media collectively as a platform that helps people develop a better perspective on the world, and he would like to use it to tell heartwarming stories, like behind-the-scenes videos. Currently, he tries to start up his own YouTube channel and to make short films that could be screened in international film festivals. He is also a huge San Francisco Giants fan and often imagine himself as a starting pitcher helping the team win championships year after year.

He is an undergraduate student at the University of California, Berkeley majoring in English and Anthropology with an interest in historical archaeology. Finishing up his final semester at Berkeley he has taken an interest in public archaeology and public outreach. In writing his Honors Thesis on the use of narrative in archaeological writing as means to both explore and bring the archaeological past to a wider public, Jesse has likewise come to take an interest in role of various stakeholders and their relationship to heritage sites and the archaeological process. In working with the Jane K. Sather Tower on the campus of UC Berkeley the Campanile he has come to understand the role of the tower in new ways; a stately clock tower it may be, it is also brimming with meaning that touches the lives of many from both close and afar.

She grew up in the Bay Area and is a student studying anthropology at the University of California, Berkeley. She will be receiving her Bachelor of Arts in 2016. After graduation, she plans to pursue a PhD. In her spare time she enjoys puppies, comics, and pointy things.

He is a junior transfer to UC Berkeley from Berkeley City College. He is majoring in Anthropology and is passionate about linguistics, Japanese, cognitive science, psychology, and evolutionary theory. He worked as project manager for the Sather Tower heritage project in ANTH136K: Who Owns the Past? Cultural Heritage in a Digital Age. For Riley, the Campanile represents hope and excellence. Every day he left classes at community college he could literally see the light at the top of the tower, as a beacon representing where he wanted to be. Thus as a new student at UC Berkeley, the Campanile is very special to him.