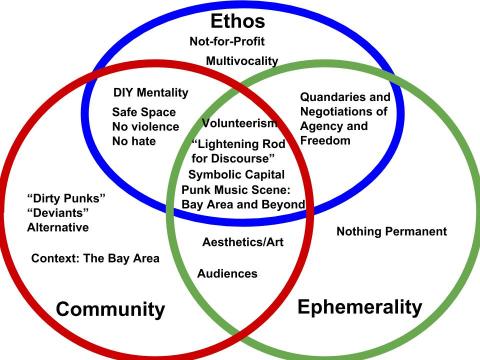 It is difficult to talk about the culture of 924 Gilman because, in a sense, it is deliberately volatile and undefinable. In many ways, the venue is a living, breathing entity which is consistently and progressively experiencing changes through the ebb and flow of the community that surrounds it. It is significant that everybody has a different story concerning Gilman and that there is no centralized narrative because individual people engage with the experience in different ways.

That being said, the most dominant cultural value, what could be called the paramount piece intangible cultural heritage is the community which the club fosters. The aspects of this community range from the intimate and personal to the structural and symbolic: the volunteer corps, the patrons, the artists, the bands, the neighbors and neighborhood (both commercial and domestic), and even the music and art scene at large can all be considered as taking part.

Historically speaking, Gilman has acquired quite a bit of symbolic capital as it relates to the global punk rock scene. Some attribute this to the venue’s ability to stick to its core values of being an open, all-ages, community and volunteer-run establishment. Others attribute this to the simple fact that they’ve been able to keep the doors open for almost 30 years (1986-Present). Groups such as Green Day, Rancid, NOFX, and the Dead Kennedys put the location on the map as a go-to destination for their fans across the world. The venue also engages the larger music scene outside itself by supporting other DIY businesses and establishments, such as local record companies and printing presses.

Politically, there is no power hierarchy. Every decision goes through a vote at the membership meetings, democratically. They decide which bands are allowed to play, who can hold a key to the venue, who gets “86’d,” or banned from the venue. Our ability to conduct this project was put to a vote. Everyone has a voice and gets time to speak their piece; your opinion is welcome but your respect is required. By virtue of the diversity of the community, a whole variety of voices make up the collective will expressed by the venue. These opinions, of course, change as the community itself changes.

Gilman is not profit orientated, but rather driven from the shared experiences of the show or event that brings the community together. As one informant, Sam Smash, remarks “we found our families at these shows” and this is reflected in the active community participation of the volunteer collective because there is a sense of social responsibility to give back and contribute to that family. Profits are split between the venue and the bands. When something needs to fixed, improved, or replaced, it is done by the members, often through donation. For many, Gilman is a safe space to escape from normative culture, a space where people can freely express themselves and as such its members are consistently focused on ways in which the community can be supported because “there’s not gonna be any support for us unless we help ourselves” (Sam).