(A long line of people waiting for the doors. All photos on this post sourced from online sites by Silas Jones.)

In recent years, the 924 Gilman community functions less like a community or an organization and more so as an organized family of volunteers who share a similar vision, values and goal for the present and future of Gilman. There’s been ownership change and waves of volunteers over the decades, but ultimately, the venue has outlived overcome many obstacles to become one of the longest surviving, nonprofit, volunteer-led organizations in the Bay Area and beyond. 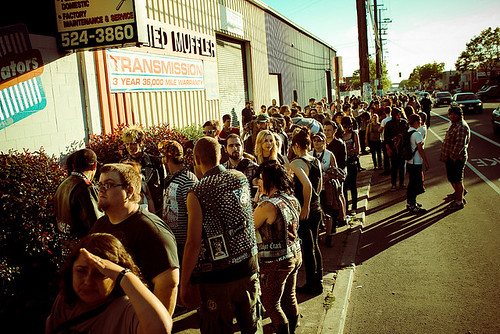 The venue continues to serve its purpose of being a venue for underground punk rock bands. Shows are held Friday and Saturday nights, with shows usually running from 7-11:30 PM. Shows are sometimes held on Sunday nights. While punk remains the most popular genre at Gilman, the venue is officially open to all genres of underground music the community wishes to see. The Bay Area heavy metal scene become increasingly tied to Gilman. In addition, some hip hop and “psychobilly” shows have been played. Gilman has also very recently started a “game night” on Thursdays for members to play various board games. 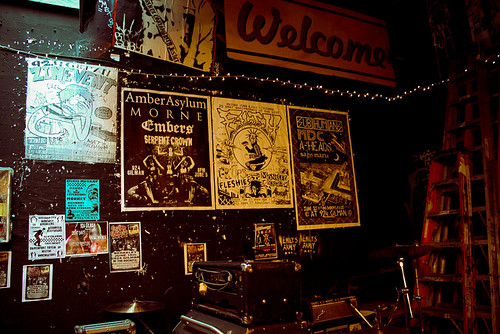 (Another view of the entryway).

Speaking with Gilman members has revealed that the community is in a state of transition, and that Gilman is a lot less “crazy” than it has been in the past. Many members are “growing up” and settling into full-time careers and relationships/families, and thus have less time to spend at the venue, and thus show attendance and revenue has been dropping. At the same time, as kids become teenagers, they discover their identities, one of which could be punk, and thus discover Gilman, and attendance might rise again. This state of transition ties into our defined theme of ephemerality. Gilman is constantly changing. Gilman veterans note that this is not the first time such change has happened, nor will it be the last. In five years, 924 Gilman Street may achieve its previous level of punk rock mayhem.