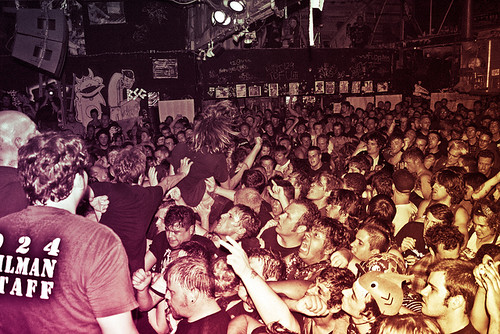 924 Gilman Street’s primary stakeholders and interest group is the punk rock community of Berkeley and the greater Bay Area. The youth of Berkeley have played a major role in shaping Gilman, as the venue was one of few places where they could express their identity and ideals without fear of repression from authority figures, such as parents, teachers/principals, and the police. At the time Gilman was founded, the punk movement had not entered the limited mainstream contact it currently has, and punks were viewed as deviants. The venue was a haven to these people (to the point where some people slept there when homeless). It was and continues to be a scene for musical experimentation and expression of ideas and ideals. The venue is known for being a safe space. Any sort of discrimination is not tolerated, as is violence and consumption of drugs and alcohol. 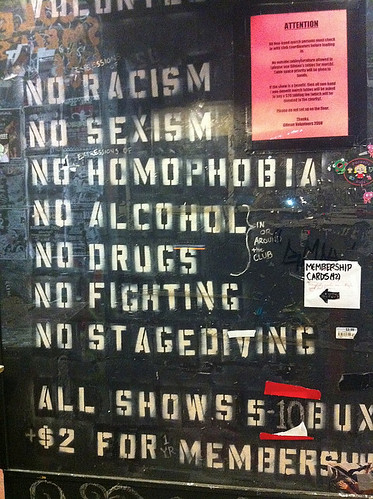 (The venue’s rules board, seen immediately upon entry. Photo taken from online source.)

The venue has a “do-it-yourself” mentality, and is run by the community as volunteers. Those who are invested in the punk scene treasure the venue highly. The stewards of 924 Gilman Street are the volunteers and community members who sacrifice their time and efforts to organize and continuously provide an outlet for the Bay Area underground punk rock scene. Some of these stewards are long time members who have witnessed the many faces come and go while others are relatively new patrons who have found their place within the culture. The venue focuses on booking lesser known bands and those not supported by major record labels. Successful bands such as Green Day, Rancid, and The Offspring got their start at Gilman. In fact, bands affiliated with major record labels are not allowed to play there, to avoid a sense of allowing “corporate music” to gain a foothold. Green Day was banned after 1993 for signing with a major label, and only recently was allowed to come back to Gilman to play a benefit show in April. Their return was significant, because Gilman agreed to bend its rules to allow Green Day to return to support the community instead of making money. However, despite Gilman’s anti-establishment mentality, it has become famous in the punk community for being a launch pad for successful punk bands. Bands make a great effort to secure a show at Gilman, even international groups. Gilman has helped contribute to many other DIY establishments and projects related to music. Some project following Gilman’s non-corporate ethos include record labels and publishing companies like Tankcrimes and Pirate Press.
The city of Berkeley is also an interest group. 924 Gilman Street has had trouble with the law and the city due to noise, unrest, and general suspicion of the punk scene and the general public. The city has tried to shut the venue down multiple times, and one city council member infamously described Gilman as a “festering sore” during a hearing in the 1990s. The punk community has had to carefully balance relations with the greater Berkeley area in order to remain open. Gilman’s members have had to demonstrate they were capable of keeping order. In an interview with former security member Sam Smash, eventually an unofficial, unspoken agreement came out with the Berkeley Police Department, agreeing that 924 Gilman Street was capable of self-policing, and that any 911 calls were something to be taken seriously. However, there have been productive interactions. The community worked to oppose the opening of a restaurant and brewery nearby, fearing the availability of alcohol would impact Gilman’s principles of an alcohol free space. This are just a few examples of these different interest groups interacting with each other, something that this project aims to continue. 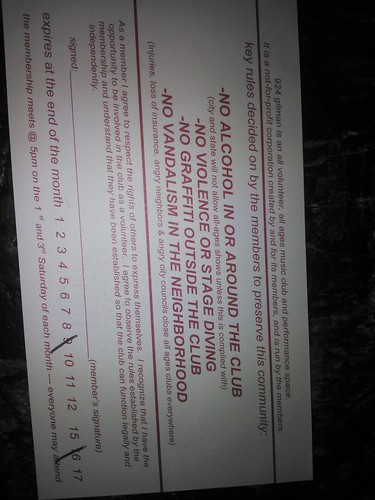 (Back of the card all Gilman members carry. Photo by Tait Adams.)