Ashkenaz is located in West Berkeley, at 1317 San Pablo Avenue. It was initially a for-profit business in 1973, founded by David Nadel, as a place for a combination of ethnic flavors in music and dance that everyone can enjoy. Nadel envisioned Ashkenaz as a space for shared world music and dance performances that would dissolve the boundaries that keep people apart. In a word, the Jewish term “ashkenaz” symbolizes just that, and in honor of Nadel’s Ashkenazi Jewish heritage he named and remodeled an abandoned warehouse to the architecture of an Eastern European synagogue.

As volunteers joined and became part of the business’s foundation, Nadel sought after various outlets that would ultimately attract attention. The business became involved with social class and ethnic strife in pursuit of fulfilling its values. Later, Nadel relaxed on politics to focus more on community building, including building relations internationally. In 1996, Nadel was shot and killed at the front door by a man who had previously been ejected for harassing patrons. The venue closed for six months while a group of patrons purchased the building and converted into a registered nonprofit organization seeking to continue Nadel’s vision.

One of the reasons it has not only been to able continue business but also stay true to its mission, is because the board of directors consists of five volunteers, three of whom are founding members and friends of David during his life. The board makes decisions about finances 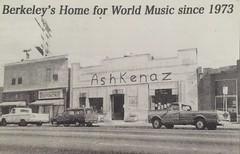 and administration, maintenance and grant proposals, but each member also has their own specific role such as archiving or fundraising. As a nonprofit that receives government and other organizational funds, and subsequent tax exemptions, Ashkenaz does not have the same freedoms of political expression that Nadel had as a for-profit small business; now it must lean more toward education than advocation.

Nevertheless, the city of Berkeley declared Ashkenaz landmark status in 1992 and David Nadel Week in 1997. Although work has been done some considerations about the current physical condition must be met to further preserve its landmark status. Most importantly for preservation are sources of funding, so with the addition of the executive director the nonprofit should be able to concentrate more on seeking additional funding sources and promoting the services it has to offer. Moreover, the current points of interpretation are scattered and aren’t getting the recognition they deserve in terms of a diversified visitor profile.