The current Interpretive Plan exists to develop new interpretations of I-Hotel history and Filipino heritage and to develop interpretations at the Manilatown Heritage Foundation Community Center. Visitors can reach to the I-hotel by driving a car, walking or taking transportation. The MUNI 8X bus stops right in front of the center and it is only a 15-minute walk from the Montgomery Street BART and MUNI station.

When visitors walk inside the first floor of I-Hotel, where Manilatown Heritage Center is at, there is a new interactive single room occupancy exhibit, that demonstrates the actual Filipino housing, adopted from Chinese Historical Society of America’s Living in Chinatown project, and inspired by the Manongs of the I-Hotel who fit their entire lives into an 8×10 foot living space. All of furniture, books, clothes and even cigarettes came from initial I-Hotel and Philippines and are donated by an actual person who stayed in I-Hotel in the 1960’s. This mini-model of the I-Hotel tenant’s room presents nostalgia in people as well as demonstrates their confined life to visitors. 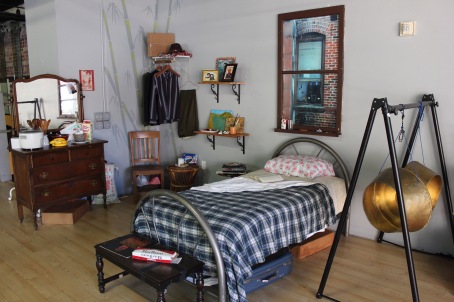 Single room occupancy exhibit, the Actual Filipino Housing, inspired by the Manongs of the I-Hotel in 1960’s. 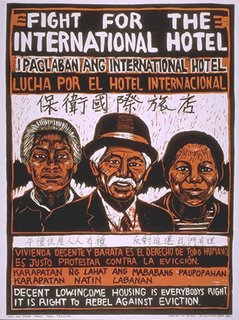 Besides the single room occupancy exhibit, pictures of I-hotel’s history, activist, and real brick of the initial I-Hotel come into sight. The center features an informational gallery on the fall of the I-Hotel, in addition to hosting community events that further promote its mission. On the Club Mandaly, people could enjoy learning Ballroom and Latin dance from Benito Santiago at the I-Hotel. Also, Carlos Zialcita, who is one of the influential members of the community explore the rich musical, literacy, fashion and cultural history of the San Francisco Bay Area by being a host on Jazz Meryenda Pop-up Jazz club. In addition, the current Board-president Tony Robles, a poet, writer and prominent activist lead rest of the events on Club Mandalay with reading his latest book, Cool Don’t Live Here No More to emphasize his generational memory of San Francisco where alienation, deportations, and technological invasions. 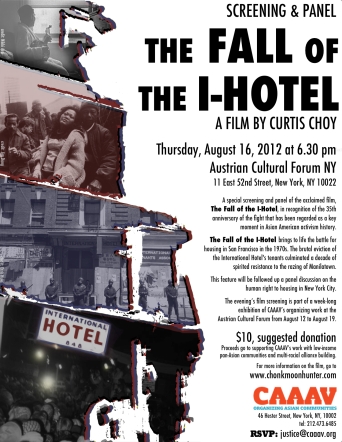 They also show a movie about I-hotel called “Fall of the I-Hotel” by Curtis Choy for visitors in order to inform them about the incident from the past, especially 1977 Elder Filipino and Chinese tenants standing up to developers to fight eviction from their homes in San Francisco’s Manilatown neighborhood. In addition, the director describes the story of people who got evicted fights, their eviction and the effects it had on the city’s tenants’ rights movement as well as the tenant’s issues now being faced and how they can fight eviction in their neighborhood and get involved. These events help advance a group’s mission, in the spirit of the tenants of the I-Hotel and celebrated the anniversary of the fall of the International Hotel, a mass eviction etched in the psyche of San Francisco.

The Fall of the I-hotel Trailer

Advertising, Broadcasting, Marketing and Fashion
View all posts by bonnykim »