← Berkeley Beats Poetry: Long Term Implementation
Read All About It: Technological Innovations (for kids from 1-92) →

The Interactive Tribune Museum plan will immerse the visitor in the news publication process. A recreation of the newsroom floor will be the setting for the museum. The visitor will move through a physical timeline that highlights the progress from the start of The Oakland Tribune as a news source all the way to the contemporary period. The visitor will be guided throughout the decades of the Tower’s existence revealing the news that shaped the City of Oakland as we know it today.

One of the goals we would love to accomplish with this heritage project would be to see The Oakland Tribune resume news production from within the Tribune Tower. Considering this realistically with politics and business bureaucracy, this endeavor must be rethought.

Refashioning this goal into the proposed interactive museum allows for a wider audience reach than restoring the paper to the Tower. An existing floor of the Tower will be dedicated to the museum. The entire floor will be divided into four sections, or quadrants. Each of these quadrants will represent a specific linear time period.

The first will chronicle The Oakland Tribune from its construction to the 1950s. As the visitor moves around the quadrant, they will progress through time. This quadrant will display the construction and dedication of the Tribune Tower in the 1920s and will then progress to the 50s era. Desks where reporters would have typed out columns will be arranged just as they would have been in the original newsroom that occupied the Pantages Theater many years ago. Visitors will be able to watch a silent film about the construction of the Tower which will be projected onto one of the walls of the quadrant and will contain early video recordings and images of the City of Oakland in its infant years. Visitors will be able to have a seat at the desk of a reporter where they will be able to pick up a freshly printed copy of The Oakland Tribune and read headlines from the roaring twenties. On another desk, the needle point of a record player will scratchily run across a jazz record from the 1940s to encompass the feel of that era.

Quadrant two will focus on the era ranging from the 1960s to the 70s. Visually, each quadrant will differ from the next. Each will reflect the aesthetics of that time period in order to situate the visitor in a more realistic environment. Flower power, peace, and love will adorn quadrant two on one side, while a focus on civil rights and socioeconomic movements will be the headlines for visitors to read as the quadrant transitions to the 70s decade.

The third quadrant will focus on the 1980s and 1990s. The major visual draw to this quadrant will be the recreation of the Loma Prieta earthquake that rocked the Bay Area in 1989 resulting in The Oakland Tribune having to relocate from the Tower while the building underwent repairs and retrofitting. A giant “crack” will run through the middle of the room while visitors will have to zigzag around overturned chairs and desks. Papers will be scattered aimlessly around littering parts of the floor. Headlines will reflect the earthquake that shook the amassing Tower. Now that we’re in the 80s, televisions can replay old news stories that documented the aftermath of the disaster around the Bay Area. 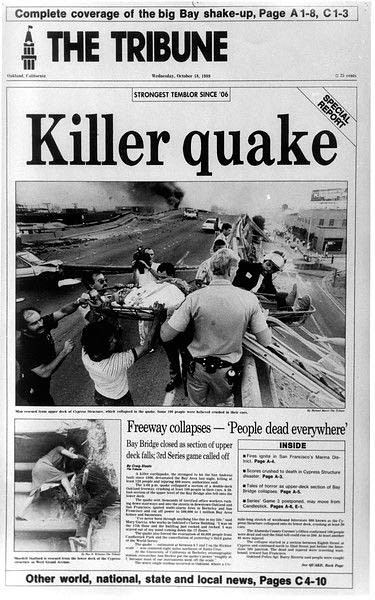 The fourth and final quadrant will consist of news from the early 2000s to the present. This quadrant will be most similar to the current newsroom of The Oakland Tribune, and will be the most technologically advanced quadrant. Desks will be outfitted with computers with which visitors will be able to scroll through archived headlines or watch videos of current events. Large touch screen panels around the room will allow the visitor to interact with previous Oakland Tribune journalists. Press a name and a prerecorded life size image of a person will appear, introduce themselves and will engage with you around news that they reported on.

Probably the most interactive and exciting feature of the museum will be The Oakland Tribune blog that museum visitors will be able to directly publish their own stories to. Visitors can sit down at the blog station and type their thoughts, reflections, comments, and concerns after completing their tour of the museum. Their only instructions will be to pen an original piece of work that will then be published to an online blogroll that will be publically accessible through The Oakland Tribune’s website. Visitors will be able to comment on their experiences at the museum, or write their own versions of some of the news articles that were highlighted as they moved through the different quadrants of time.

This interpretive project will incorporate many historical aspects as it chronicles the history of the City of Oakland. This will be done by the visitors literally walking through different decades of the paper and the Tower’s history while viewing the big news stories that were covered during these periods of time. With this interpretive plan, there is also a heavy focus on technological innovation (another one of our themes) to show the technological evolution of The Oakland Tribune from a paper using the hand printed press method to one that today might be described as completely digitalized. The advancement of technology as the visitor walks throughout the plan also allows for a more interactive experience.

Perhaps the most vital theme incorporated into this plan is tourism. The museum is set up to attract individuals to experience the cultural heritage of The Oakland Tribune within the Tribune Tower. Without tourism, there is no museum. Without daily visitors, the vision of the interactive museum will be lost and the dream of having the newspaper again housed within the walls of the Tower will never come to life.

Our target audience of the museum will be by and large the community of Oakland. The news stories published by the Tribune are the stories of the individual people in the city. Visiting the museum should evoke memories, and take visitors back to a certain place and time. The great thing about the museum is that it will make the Tribune Tower the most accessible to the public that it has ever been. People will even have the opportunity to become, for a short time, reporters themselves while experiencing news production first hand via the blog function. We really hope to draw people into the building and to make their visit one that leaves them feeling as if they just time traveled into the past to a different time period in the City of Oakland.

Sight, sound, and touch will be used to enhance the visitor’s sensory experience in the museum. This will be done by seeing the design of the quadrants change as you progress along the timeline of the city, listening to the different prerecorded oral stories, and touching copies of the papers produced by The Oakland Tribune. We don’t want the visitor to come into a static environment where all they do is look but instead we want them to engage with the environment using their different senses. The goal of the interaction in the museum is to make the visitor feel as if they are a journalist for The Oakland Tribune themselves. The timeline and the ways we will represent each decade in the quadrants will hopefully bring the visitor back to those periods of time in their own lives.

This project relates to sustainability in several ways that will benefit both the Tribune Tower and The Oakland Tribune newspaper. The museum will have a nominal entry fee with proceeds going to making the museum more self-sustaining. Any additional profits left over can then be directed to the preservation of the Tribune Tower itself in order to ensure that future generations can enjoy the newly founded museum inside. In regards to The Oakland Tribune, the museum acts as a living archive. People will be able to engage in the news production process and the printed word of The Oakland Tribune and the news realm in general will continue to live on. 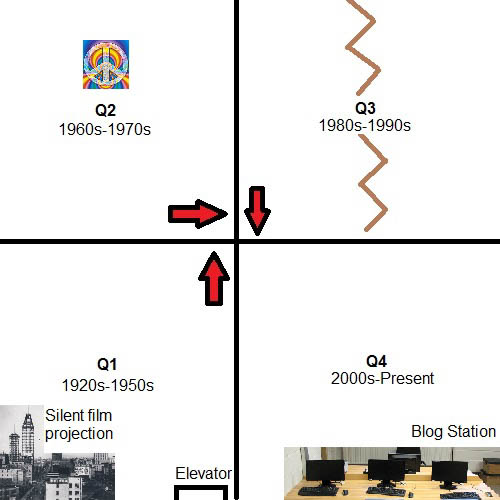 ← Berkeley Beats Poetry: Long Term Implementation
Read All About It: Technological Innovations (for kids from 1-92) →