The following proposals will enhance the experience of Alcatraz’s visitors by expanding upon current tour options and introducing entirely new plans. These proposals make specific use of digital technology to provide Alcatraz’s visitors with modern, interactive methods by which to learn about and engage with Alcatraz as a cultural heritage site. The proposals will be focused on providing visitors with accessible information and educational opportunities to learn about Alcatraz’s discovery, wildlife and landscape, and rich history as a communal home.

Alcatraz’s gardens and native wildlife represent an important aspect of the island’s heritage. However, Alcatraz’s current visitors have only limited opportunities to learn about the island’s gardens and wildlife through scheduled tours offered a few times per week . My interpretive plan, the Wildlife of Alcatraz Smartphone App, would allow all of Alcatraz’s visitors to learn more about the island’s plant and animal species. The app will include two specific features to appeal to visitors; a story-mapping feature as well as a virtual scavenger hunt

The story mapping feature would use GPS technology to provide visitors with location-specific information about the plant species in each area of the gardens, as well as the animal species that are native to Alcatraz. As visitors walk through the gardens, the app would provide location-based information about the various plant species found in specific areas of the garden. In addition to providing information about the island’s 13 gardens, the app would also feature audio commentary by the volunteers who work to maintain the island’s plant life. This audio commentary would provide users with firsthand accounts of Alcatraz’s rich history from some of the island’s most dedicated stewards who work to maintain the expansive gardens.

The app would also feature a scavenger hunt feature aimed at engaging the island’s youngest visitors. Alcatraz’s violent history as a maximum-security prison may not be suitable for young children. The app’s scavenger hunt would offer young children visiting the island another way of engaging with Alcatraz’s history. Children would use the app’s GPS based virtual map to identify different plant and animal species, which would then be rewarded with points that could be redeemable for a small prize such as a sticker or pencil from the Alcatraz gift shop.

In this project, we would incorporate visual, audio, and olfactory components to create a virtual, interactive, self-guided tour of Alcatraz. We would use technology and historical archaeological knowledge to bring these three senses together to recreate the experience of Alcatraz in a way that would be as lifelike as possible. The viewer would sit in a booth located on Alcatraz near the entrance. The booth would be painted black and closed with a door, so the viewer could isolate their senses to those presented to them by the simulation. As the viewer controlled where they walked, using remote controls attached to the booth, the booth would release different odors depending on the viewer’s location in the tour. The viewer would also wear noise-cancelling headphones so that they could best hear the accompanying sounds and voices coming from the virtual tour. The themes that the multi-sensory virtual tour booth focuses on are prisoner life, community and/or home, education, wildlife and landscape. There would be tours available from the different significant time periods from Alcatraz’s history.

By spreading awareness of the significance of the site, more tourism will ultimately be generated. As more people learn about Alcatraz and become fascinated with its history, they will want to tour it themselves and will encourage their friends and family to do the same. These virtual tour booths will give visitors the opportunity to see the island as it was in its various reincarnations. They will be able to stroll through the island when the Native Americans occupied it— follow the paths that they took to their campsite and observe the graffiti they decorated the walls with. Also, they could even speak to some of the characters in the tour to better understand what Alcatraz means to them. Our ultimate goal for the multi-sensory virtual tour booths is that they can be a tool to help draw interest from and educate the world about the island and its valuable roles throughout history. 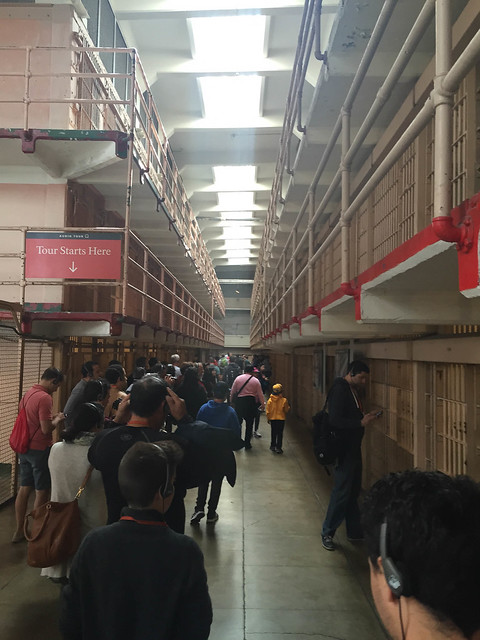 Alcatraz currently offers audio tours where tourists use headphones to listen as they take a walking tour around the site. We think this experience could be improved upon if people could visually see things besides the empty prison cells and common areas that once used to be occupied by prisoners. In this plan, a set of virtual tour glasses would be added to the already implemented headphone tour that the Alcatraz hosts for the tourists coming to visit the site every day. The glasses and headphones will be synced together to show certain things that the participant is hearing at the same time to enhance their experience of the tour at Alcatraz.

Additionally, this interpretive plan is highly educational. With this project, guests would be able to see virtual prisoners doing what the tour would explain them doing. Certain locations of the tour would have portions where the visitor would stand still and a slideshow-style projection would come out through the virtual glasses’ lens to teach the participants. The lens will also project interviews of ex-prisoners who are alive today, so they can hear firsthand how it felt to be a prisoner living in these cells. They will also learn about the discovery of the site itself while on the tour.

This plan aims to make the walking tour more educational by incorporating an interactive projection as the visitors walk through the cells. While visitors go from cell to cell, a projector would display a hologram on the wall. They could see a projection of the daily life of a prisoner as he goes about his routine. This project would incorporate the themes of prisoner life and community and/or home. To further depict the daily life of a prisoner, the projector could transition from the prisoner having a breakdown to having someone come provide comfort. It is very important to show the emotional roller coaster the inmates went through. Also, having the visitor walking into the cells adds another level of emotion. Physically being in that space, while watching these videos, helps build a more holistic picture of prisoner life.

Another way to do this holographic projector would be to depict the significant time periods in Alcatraz’s history. One prison cell could have a hologram show when Alcatraz was a site used for armory; how it looked or what was going. The next cell could show when the site was a factory.  Then, in another cell, the hologram could show the prison. Instead of focusing on the individual prisoner, it could focus on the prison as a whole. Another cell could look back on when the Indians of All Tribes occupied the island and show the graffiti and areas of conflict. 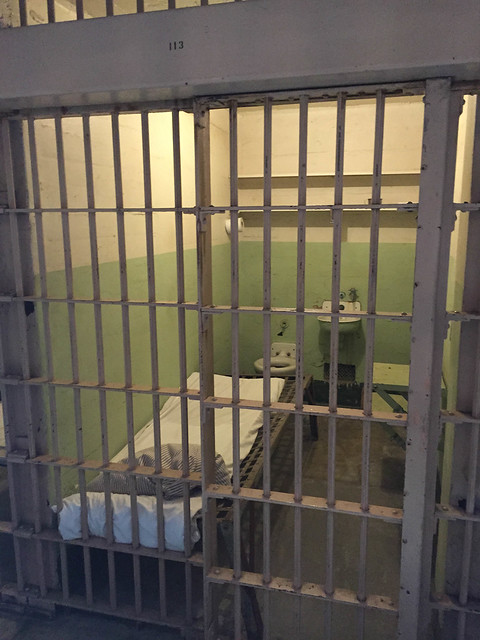 Currently Alcatraz has walking tours that allows you to see into the cells and walk through the common areas, but nothing that gives significant insight into what prisoners’ lives were like within the cells. Visitors can enter in large groups and the projection that continuously loop allowing people to visit the cells regardless of time. This projection plan will humanize the site instead of pose it as a structural facility.

Posted on December 10, 2015, in Alcatraz-2015, Anthro136kF2015, Uncategorized. Bookmark the permalink. Comments Off on Interpretive Plans.