← Read All About It: Technological Innovations (for kids from 1-92)
Frozen in a Moment: The Oakland Tribune Tower Audio Tour →

Re-Imagining the Tower: An Alternative History of Oakland

Re-Imagining the Tower: An Alternative History of Oakland

The web browser goes dark a moment and requests permission to use the full screen. You click the button that says “Allow” and the computer screen becomes a window pane looking down over the City of Oakland. In your headphones, a brief crackle of radio precedes a voice telling you that the captain will be landing soon. Pressing a button that says “Next”, the image fades away and is replaced by another that shows a zeppelin hovering in the sky above the Oakland Tribune Tower. The images are static, but around you, in surround sound, are the muffled voices of the cabin crew directing everyone to prepare for docking. On the screen, text appears paneled to one side as if in a comic book. It informs you that the year is 1926, the height of the roaring twenties, and that you are a reporter from New York aboard a zeppelin preparing to land in Oakland and that you are about to investigate the story that is going to make your career…

Thus begins the interactive visual novel set in an alternative, steam-punk interpretation of downtown Oakland. Also referred to as an interactive fiction computer-game, a visual novel is a computer game that uses static graphics, text, and background sound to immerse the user in a story that leads them with audio and visual cues. However, the Tribune Tower’s interactive story has a twist, in which the user will quickly learn that they are being brought into a story about a story – a visual novelization of a historic event that took place in Oakland during the 1920’s. Using archived stories from The Oakland Tribune itself, this project seeks to re-tell history through a fictional and alternative steam-punk lens – blending Oakland’s authentic history with an imagined history where the Tribune Tower was used as a zeppelin mast and the city became the primary docking station for transatlantic travel as opposed to San Francisco.

The main themes that are encapsulated in this project are history, accessibility, media production, technological innovations, and tourism. First, the project seeks to engage the audience in Oakland’s history by telling stories about events that really happened and were reported by The Oakland Tribune. Second, it challenges issues of accessibility by rendering the Tower as something inherently accessible while transforming the site into the very conduit that permits passengers to enter the City of Oakland. At the moment, the modern Tribune Tower is largely inaccessible. It is an area occupied by a building that one must go around. The visual novel transforms this entirely by making the Tower something that one travels through. Media production is also included in this project as it invites the audience to think about how content was produced by The Oakland Tribune. No matter what twists and turns the story may take however, the participant will always be returned to the “official” story that was published in the newspaper, raising questions about how truth is manufactured by places that produce media. Technological innovation is also a key part of the visual novel as the steam-punk setting requires a re-imagination of how technology might have evolved if zeppelins and steam-power had taken off. In this alternative history, Oakland becomes the international hub and the center of innovative technology rather than San Francisco. Finally, tourism lies at the heart of the project as a large part of it revolves around the desire to engender more interest and visitors to the City of Oakland and the Tribune Tower. 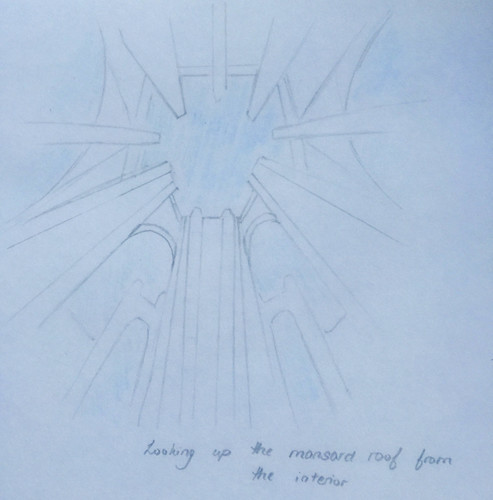 The project has three primary goals. The first is to act as an outreach program for a potential audience. It targets members of the many alternative communities in the Bay Area (particularly the steam-punk community) and provides them with a means of engaging with the site from the comfort of their own home. Hopefully, this will inspire users to visit the site and will draw new tourism and customers to the City of Oakland. The second goal is to provide a story about Oakland that challenges current and accepted narratives, one being, for example, that Oakland is violent and unsafe or a place where only poor people live. It encourages re-conceptualization of Oakland as a place where exciting and interesting things once happened and may still be happening today. This will target the residential audience within the Bay Area that already knows of Oakland but avoids it. Finally, it seeks to re-imagine the Tribune Tower and how it exists in its own space. From the zeppelin, the user sees the Tower from the perspective of someone looking down at it from above, a point of view most people never consider. In the next scene, when the zeppelin is shown approaching the Tower, the user is looking up and the peak of the Tower is given relativity in context by being placed next to something. Close up shots can provide the user with a sense of how near (and how far) the landing mast is to the zeppelin and as they cross from the zeppelin to the docking station, a glance down shows them how high above the city the Tower stands. By playing with the space, the project invites the user to re-consider the space the Oakland Tribune Tower inhabits and perhaps invites them to play with the space in reality too. This will draw in not only the first two audiences but also people who currently occupy the Tower’s space such as the people who work there, the people who live near there, the people who maintain it, and the people who own and manage it. 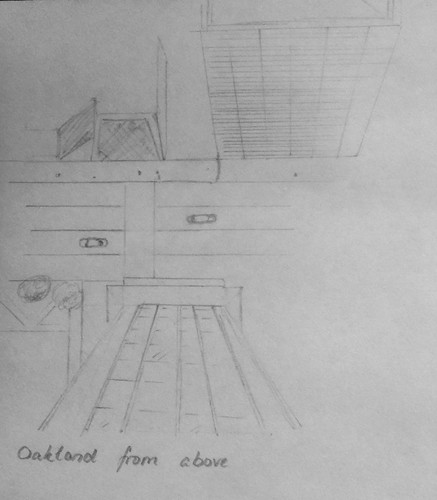 The project primarily incorporates the senses of sight and sound, but also proprioception as the user is invited to re-consider the Tower’s location in space and their relative position beside and within it. It also incorporates cinema as background music, sounds, and “fade to black” moments all contribute to a sense of drama. However, the visual novel also offers itself to device-specific “mini-games” in which after having completed the interactive story, the reader is able to download an app that takes them to the “real life” scene of the event and allows them to visit the memories they have already created in the story world. By blending such physically-aware apps as DeTour and Google Stories, visitors could lift their phones in certain locations and see on the screen the scene as it was in the novel while immersing themselves even more completely in the sights, sounds, and smells of Oakland as well as their own movement through the streets.

An important way in which this project contributes to the sustainability of Oakland is that it generates new interest and seeks to attract new visitors. Although the economic aspects of sustainability are vital to keeping the Tower maintained, there’s also a key area of intangible heritage that is sustained by this project. When I first began researching the Oakland Tribune Tower, the rumor associated with it was that it was supposed to have been a zeppelin docking station. This rumor was quiet but quite persistent. The existence of the rumor led me to question why the idea of Oakland as a zeppelin landing port had so thoroughly captured the imagination of the city’s inhabitants. But as I listened to the extant narratives about the city (the stories of its violent past, its rough neighborhoods, and its poverty) I realized that the zeppelin in a way represented everything Oakland was “supposed” to have been. It was never intended to be a food desert or a dumping ground for the poverty-stricken. Drawing upon this realization, I began to research zeppelin landing docks in the United States and I could find only two, both unused.  The first is the InterContinental Hotel in Chicago, Illinois, built in 1929, and the Empire State Building in New York, built in 1930. This places Oakland on the same level as these great cities which can be described as the jewels of the United States. The idea that the Oakland Tribune Tower might once have been a landing mast for a zeppelin represented everything Oakland itself might have become. It places the city on par with the places that tourists want to go to, and the big names in America. This sense of pride is an enormous part of the Tower’s intangible heritage and although it is not consciously linked to zeppelins and airships, the Tower still stand as a representation of a golden-era and a hope that the city unfortunately was not able to fully realize but however, a hope that can be re-inspired and sustained by this project. 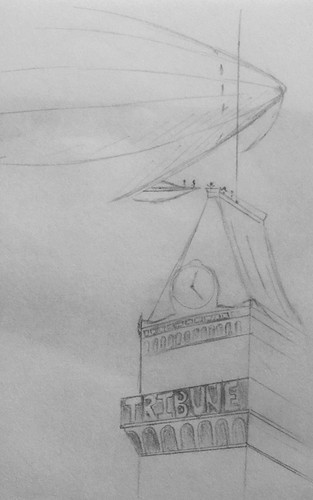 ← Read All About It: Technological Innovations (for kids from 1-92)
Frozen in a Moment: The Oakland Tribune Tower Audio Tour →