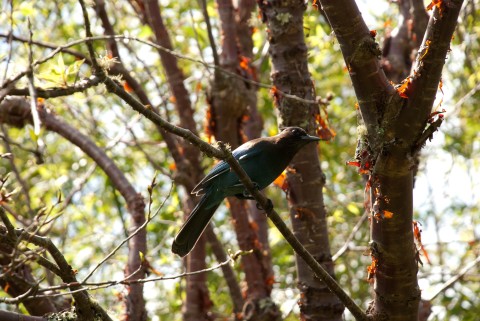 In order to understand the deep connection of the Green Gulch Zen community to the land, one must first have an understand of the history behind how the Zen Center came to acquire the land. At the time of the arrival of the Europeans, the watershed was in habited by the Coast Miwok tribe.  The known history of the land between the 1800’s and mid-1900’s was that it was used for farming. In 1945, George Wheelwright, co-founder of Polaroid, purchased the land and turned the property into a family farm, which included the present day organic farm, as well as a number of dairy cows. Although Wheelwright was, in many ways, very connected to the land of Green Gulch, his intent to create a pasture for his livestock meant the construction of a dam, levees and drainage channels to divert the Redwood Creek, which runs through the property into the Pacific Ocean.

One of the founding principles of the Green Gulch Zen Center is that humans need to protect the environment from us, not the other way around. The community of Green Gulch has been, and continues to be, actively working to live harmoniously with the surrounding nature and to take measures to protect it.

Green Gulch Farm is the habitat of many diverse species of wildlife, including fish, birds, mammals and plants. The Redwood Creek, which runs through the property, is an essential spawning and rearing ground for coho salmon, steelhead trout and coastal cutthroat. In 2005, the coho salmon were listed as a federally endangered species and between 2007 and 2009, no salmon were seen during the winter run. However, in 2010, around 40 salmon were spotted and produced 23 clusters of eggs. This number however is only about 1% of the 1940 levels of coho salmon.The Green Gulch property is also home to many native songbirds, as well as numerous egrets and the Northern Spotted Owl. The pond that sits in the middle of the property was excavated by the National Park Service in 2009, to provide a habitat for the California Red-legged Frog.

Green Gulch is currently collaborating with the Park Service on a plan to restore the marshland in the lower fields. This plan, which would involve removing the parking lot that currently overlooks Muir Beach, in order to restore the land to its original marshland form. Through their work with NPS, they have “been studying the ecology of our watershed and asking ourselves questions about how the land might look and behave if left to itself.” One part of this process would involve removing the concrete channels which currently hold the stream flow, and allow this to run through the lower fields, now used for agricultural purposes.

Posted on May 13, 2011, in Green-Gulch-farm-zen-center-Marin and tagged green gulch, marin, zen. Bookmark the permalink. Leave a comment.