Alcatraz Island is located in the San Francisco Bay, only 1.5 miles from the shore of San Francisco, California. It now contains structural remnants of a prison in disuse, early military fortifications, and the oldest operating lighthouse on the West Coast of the United States. While the island is thought to have been first inhabited by the Ohlone Native American tribe, the earliest recorded discovery of the island was by Spanish explorer Juan Manuel de Ayala in 1775. Juan Manuel de Ayala christened the island “La Isla de los Alcatraces”, or the Island of the Pelicans, due to the island’s large population of seabirds.

In 1850, U.S. President Millard Fillmore claimed the island for military use, leading to the eventual construction of a fortress. In 1861, when the American Civil War started, the island was mounted with 85 cannons in casemates in order to protect the San Francisco Bay from potential attacks. Although the guns on Alcatraz were never fired for offensive reasons, Confederate sympathizers and privateers during the Civil War were imprisoned on the island during wartime. 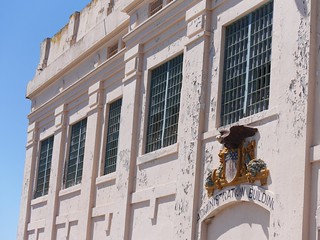 In October 1933, the Bureau of Prisons was given the responsibility of turning Alcatraz from a military prison to a high security federal prison, marking the beginning 5 of the era for which Alcatraz is most well known. In 1934, Alcatraz opened and became America’s first maximum-security, minimum-privilege federal penitentiary. Alcatraz gained worldwide notoriety due to its isolated location and reputation as home to America’s most notorious criminals, such as Robert Stroud and Al Capone. Several highly-publicized escape attempts were made by prisoners despite the prison’s supposedly inescapable fortifications; to this day, Alcatraz escape attempts continue to be the subject of great speculation. In 1963, after nearly thirty years of use, U.S. Attorney General Robert Kennedy ordered the prison to be closed, citing its high maintenance costs and quickly eroding structure as reasons to discontinue use.

Indians of All Tribes Occupation

In March of 1963, the prison officially closed, ending the island’s chapter as an infamous federal penitentiary. Six years after Alcatraz’s prison was closed, Richard Oakes led a group of approximately eighty Native American activists from various tribes, who named themselves the Indians of All Tribes, in occupying the island for nineteen months, starting on November 20, 1969. The Indians of All Tribes wanted to draw attention to the injustices directed at Native Americans throughout American history, specifically protesting government policies that acted to terminate Native American tribes. In order to draw attention to their cause, the Indians of All Tribes painted graffiti slogans on prison walls, prison doors, and the water tower—some of which were restored for visitors to view today, such as the water tower, pictured below. The federal government initially rejected the Indians of All Tribes’ occupation of Alcatraz, and attempted to force the group to vacate the premises by placing barricades around the island. These barricades proved ineffective, but authorities continued to insist upon the group’s departure from the island. Over the nineteen-month occupation, the Indians of All Tribes struggled to remain a cohesive organization, as members within the group struggled for power over one another.