The National Park Service currently acts as the main steward of Alcatraz, as it maintains the facilities and oversees tourist operations. Volunteers also act as stewards of Alcatraz. For instance, dedicated volunteers care for the island’s expansive gardens. In the past, various stewards, such as Native American occupants, prison employees, and American military, maintained the island. Interestingly, Alcatraz’s prisoners also acted as stewards, as they helped maintain the island’s gardens.

There are several unique groups of individuals who are stakeholders in Alcatraz’s past, present, and future use. Former prisoners and their descendants are stakeholders of Alcatraz, though they have a range of experiences with the site. Interestingly, some former prisoners have expressed their admiration and nostalgia for the island prison. The infamous bank robber Whitey Bulger, who was imprisoned at Alcatraz for three years before being transferred to another federal penitentiary, later wrote of his yearning for Alcatraz and its scenic view of San Francisco, as pictured below. 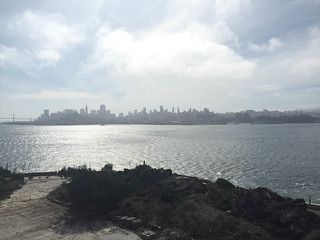 Finally, Alcatraz is a site of interest to various interpretive groups and academics. For instance, the We Players, a theater group dedicated to performing classic dramas in unusual locations, performed Hamlet on Alcatraz Island, as pictured below.