Intended originally as a zeppelin landing mast for transatlantic travel, the Tribune Tower has also served as the original home for the city’s news publication, The Oakland Tribune, for several decades. Thus the Tribune Tower has always been a symbol of connection within the city – connections to distant places and innovative technologies, and also connections to the many people within the community who read the newspaper, and for whom the tower was a part of their daily lives.

Our primary objective is to enforce and strengthen existing connections between the tower and the community and to hopefully forge new ones that allow for public interaction with both the tangible heritage (the site and space the tower occupies) and the intangible.

A key theme in our management assessment has been the accessibility of the site and the ability for our visitors to forge their own interpretations of the tower. However, there are several constraints in achieving total accessibly. First, the building is privately owned and also is for many an office space and work environment where it would not be appropriate to have members of the public. In addition, much of the site is not ADA approved, due to the building’s age.

Detailed view of the clock arms.

Architecture behind the Tribune marquee.

There is also the health and safety of the public to consider as the tower has been associated with at least two deaths in the last fifteen years one of them being a suicide carried out by a girl who somehow got past security in the tower and out onto the roof of the 6 story building attached to the tower. This means that great modification of the tower would need to take place for it to become a truly accessible public space leading us to our second objective of our management assessment which is preservation.

Because the tower itself is an iconic image, it is important to avoid altering the aesthetic in any significant way which could render the landmark “unrecognizable” or simply sever people’s attachment to it because it no longer looks like “their” tower.

At the same time however, in matters of preservation, the tower cannot be metaphorically cemented in concrete and forced to remain unchanging as that may render it “too” perfect or pristine for the changing community of Oakland to identify with. Fortunately, the current owner of the tower has already adopted this concept of “flexible preservation.” Rather than replace the neon lights with newer, modern lights, the owner has opted to maintain the existing neon technology. In a similar vein, concepts of “flexible accessibility” have been adopted in our management assessment, querying ways in which the space can be made publicly accessible without the need for actual physical interaction. 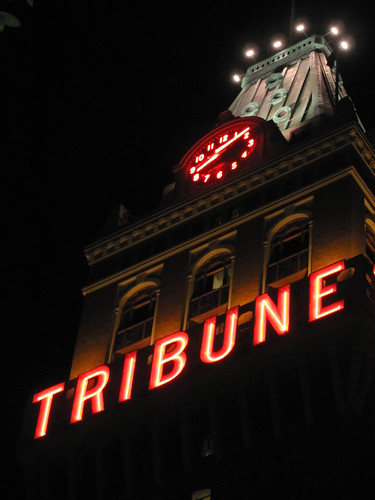 “Neon, the greatest thing in the world!” -John Law, tenet and long-time caretaker of lighting at the Tribune Tower.