Built in the early half of the 1920s, the Oakland Tribune Tower has housed “a theater, a furniture store, a radio station, a tavern, law offices” (Lighthiser, 2014), and the newspaper from which it derives its name. The Oakland Tribune has reported news in the city since 1874. The building sits at 409 13th Street in downtown Oakland. Its exact location is recorded by Google Maps as 37.8032378N, -122.2708058W.

Prior to the addition of the tower section in 1923, the six story Tribune building that housed the Breuner Furniture Company was built in 1906. The Breuner Furniture Company vacated its home at Thirteenth and Franklin in 1918 prompting Knowland to foresee the empty showroom as the site of his newspaper facility. In the same year he acquired the property from the Breuners and moved news production of The Oakland Tribune there. 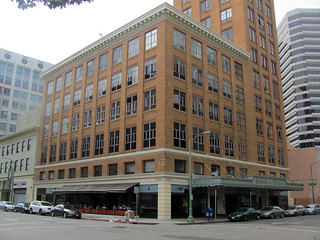 Original 6 story Tribune Building which previously housed the Breuner Furniture Company. Construction of the tower was completed in 1924.

The tower was influenced by the campanile at St. Mark’s Basilica in Venice, Italy which was designed in the Renaissance Revival style by architect Edward Foulkes. With its blend of classical French and Italian architecture, the red brick tower with its green mansard roof stands at 305ft (93m) high and possesses twenty-two stories and approximately 89,000 square-feet of interior floor space. Although it was the tallest building in Oakland during the 1920s, it stands today as the 11th tallest. A parapet wrapped around the tower at the 16th floor says the word “Tribune” in bright white letters that illuminate with red neon light after dark. Each number on the clock is 26 inches and the hour hand is six feet and three inches long weighing about 35 pounds. The minute hand is nine feet and two inches long weighing over fifty pounds according to a 1918 article in the Journal of Electricity. Due to their immense size, the clock hands must be manually reset every few months to maintain an accurate time as a result of the hands lagging under their own weight. 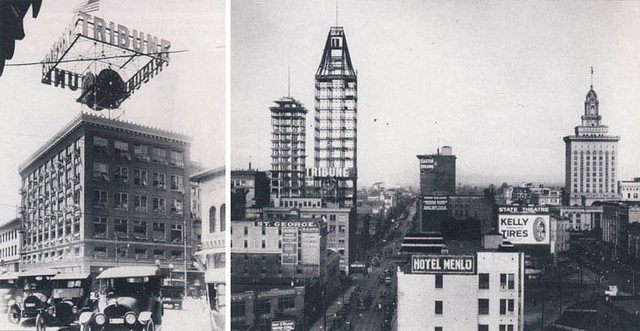 (Left) The Tribune building prior to the tower addition. (Right) Construction of the Tribune Tower, its exposed steel framework looming over Oakland’s City Hall across Broadway.

“In 2011, Tom Henderson, a third generation Oaklander and local entrepreneur, purchased the building for $8 million. Since … he has made several renovations. Located on the ground level of the tower is the Tribune Tavern restaurant and Modern Café. There is a call center for Henderson’s company CallSocket, as well as law offices and nonprofit organizations.” (Arvizu, 2015) Henderson also has history with the newspaper. He was a delivery boy for the Tribune 50 years ago during his childhood. “I’m proud to own the Tribune building,” Henderson said. “We treat it as a 100-year-old building [should be treated], and we take care of it because of its [varied and important cultural] history.”

Today the building itself is in very good shape, although the clocks are in need of constant maintenance. The elevator mechanisms have been replaced with modern technology to make the trips up and down the tower safer, and the original machinery has been preserved inside the tower.

The Tribune building has been re-purposed to serve an ever-evolving community in Oakland. The building was declared a city landmark on May 4, 1976. “The tower has changed and grown and developed over the years, much like the city, but its integrity has remained.” (Lighthiser, 2014) Still, the tower maintains its notable presence in the downtown landscape by creating new spaces of public interest and accessibility for the community.